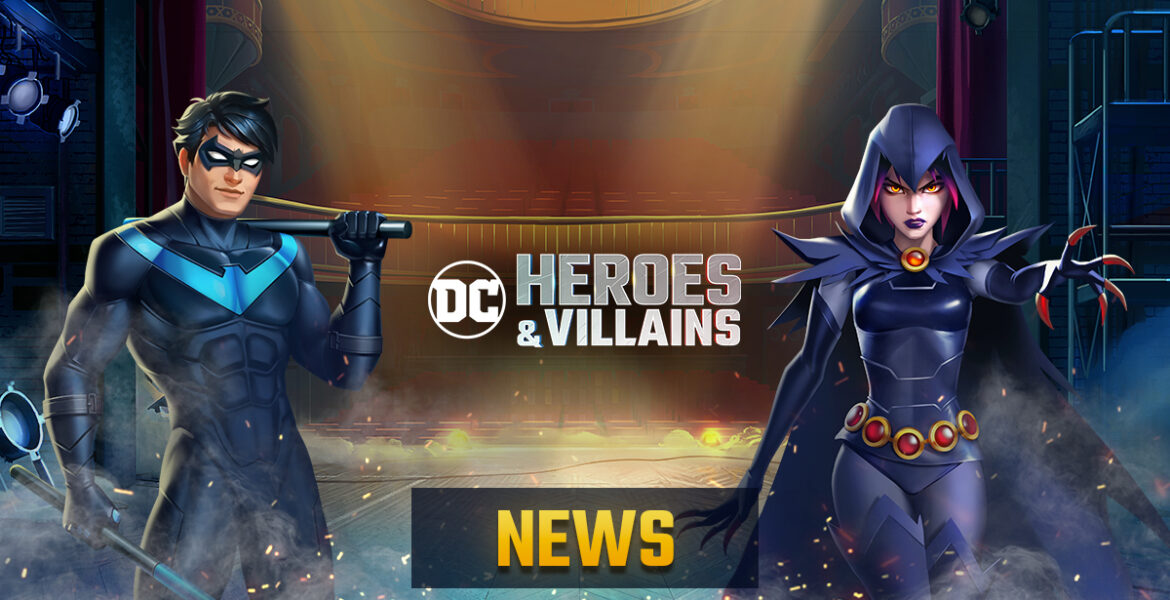 We know many of you have been eagerly awaiting news and updates about the game, so let’s get straight to it—the goal of this community update is to answer all of your questions, let you know what’s happening with the game, and establish a better dialogue with the community. We all want this game to be a success, and we know we can’t do it without your support.

DC Heroes & Villains has been in production for several years, and the soft launch period has revealed important details about what’s working and what needs to be improved. The team has spent countless hours over the past few months planning our next steps, which we’re finally ready to share with you!

After analyzing the game and listening to your feedback, we identified various critical parts that needed significant work. Our next release will give you a glimpse of where we’re going with the game.

Shards still exist in the game, but they’re only collected through character duplicates. Those shards are now used to upgrade Passive Abilities. Once you max out your abilities, you will earn a special currency that can be used in the new Upgrade Shop.

Our internal tests have already shown that this model is much more appealing and provides a better gaming experience, but we’re eager to hear your thoughts!

We always want to have new content, events, and modes for everyone to enjoy. We’re happy to share phase one of our new Assault Mode (PvP), which will be introduced in the next release! Phase one includes:

Phase one is all about building the foundation for PvP. We want to get everyone battling, testing the matchmaking, and ascending the ranks.

Phase two (coming at a later release) will bring a whole new dimension to the mode:

Unlocking characters and the addition of Assault mode are the biggest changes in the next release, make sure to read the release notes available in the coming weeks for even more details!

While we’re excited about the next release, it’s really just setting the table for what’s to come. Aside from phase two of Assault Mode, we have a variety of big improvements in the works:

From the very beginning, we wanted to make sure players have a reason to always come back and visit iconic DC universe locations—places like Gotham, Metropolis, and Themyscira are too special to simply finish and leave behind.

That goal presents a lot of challenges. Currently, the game allows players to pick between Hero and Villain paths across all locations, but it can quickly become overwhelming to decide where to go next. It also adds a lot of distractions to the maps.

So we’ve decided to streamline the map experience to really focus on what’s important:

The DC Characters are the heart of the game, and we want to make sure we’re staying true to each character while also building a long-lasting metagame. Our combat team is hard at work analyzing every character, building stronger Synergies, clarifying Character Roles, and ensuring a variety of viable strategies across all modes.

We’re proud of the battle experience we’re creating and the new elements we’ve introduced to the Puzzle RPG genre so far, but we’re not done yet! Here is a list of ongoing tasks that we want to improve on: We have a laundry list of things we want to improve, including:

The team can’t wait to get all of these new game features and improvements to our players. Since major changes are coming to the game, a game reset will be required in the next release for our development team to collect fresh data and evaluate the new improvements.

We understand that your engagement with the game—either time, energy, monetary or other—is valuable to us. To reward your early loyalty and support, we have a comprehensive plan to compensate players that are currently playing the game in Soft Launch.

We will gift players with a more than generous amount of in-game currencies based on their monetary transactions. On top of this, we will be gifting additional currencies to ALL players based on gameplay factors: amount of time invested, account progression, and characters (Hero/Villain) progression. Just ahead of the reset and compensation, we will communicate a more detailed timeline for when the gifts will be waiting in your in-game mailbox as part of the next release.

In order to ensure a smooth transition for all compensation gifts, we encourage all players to document their current in-game Support Key (shown at the top left corner of the loading screen or in your game profile).

As you may see, the game is going through many improvements and a lot is planned for the coming months! While everything mentioned today should be available this year, we’re going to need more time to gather your feedback, iterate, and polish it before we feel comfortable to launch the game worldwide. That means, DC Heroes & Villains will have a new release date set in 2023. We will keep updating the community as we get closer to the official release window. Again, we thank you for your continuous support and patience!

HOW CAN YOU HELP?

As we continue our development of the game, we encourage everyone to join our official Discord 37server to stay up to date with all the latest news, share feedback, report bugs, and join the discussion!

Don’t forget to pre-register to unlock more rewards for everyone at launch!